Nanda dynasty was the ruling dynasty of Magadha and successor of Shishunaga dynasty, founder of the dynasty was Mahapadma Nanda. Nanda dynasty immediately followed by the Maurya dynasty. According to the Puranas, Nandas were from the low social origin, Mahapadma nanda was the son of Mahanandin(last ruler of the Shishunaga dyasty) and a shudra mother.

In the Puranas he known as “The destroyer of all the Kshatriyas” because he vanquished old dynasties of North. Mahapadmananda defeated Panchalas, Kasis, Haihayas, Kalingas, Asmakas, Kurus, Maithilas, Surasenas and the Vitihotras. He expanded his territory south of the Vindhya Range into the Deccan Plateau. This ruler claimed to be ekarat, the sole sovereign who had destroyed all the other ruling princes. It seems that he captured not only Kalinga but also Koshala which had probably rebelled against him. Mahapadma Nanada ruled for 10 years and died at the age of 88. He was succeeded by his nine sons who ruled successively. 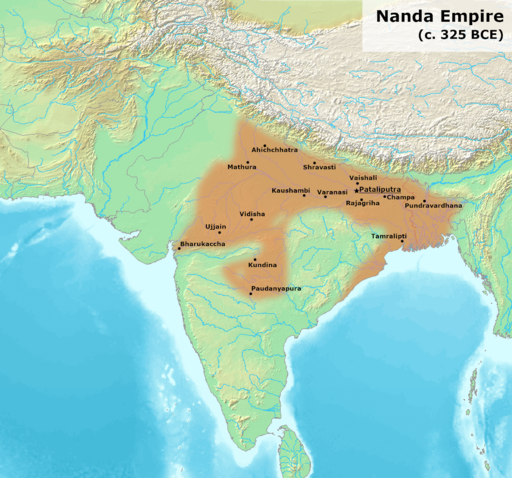 The Nandas were fabulously rich and enormously powerful. The fabulous wealth of the Nandas is also mentioned by several sources. It is said that Magadha’s army consisted of 60,000 cavalry, 200,000 infantry, 2000 chariots and 3000 to 6000 war elephants. Such a huge army could be maintained only through an effective taxation system. Alexander’s army refused to fight an such strong army and returned.

When Alexander invaded India, Dhana Nanda was ruling over Magadha. Dhana Nanda was one of nine sons of Mahapadma Nanda and the last ruler of Nanda dynasty. Magadha was at greatest extent at the time of Dhana Nanda, extended from Bengal in the east, to Punjab in the West and as far south as the Vindhya Range. Dhana Nanda was over thrown by Chandragupta Maurya who founded Maurya Dynasty under which the Magadhan empire reached the apex of glory.