Shishunaga dynasty was the successor of the Haryanka dynasty. The founder of the dynasty was Shishunaga (founded it around 413 BCE), who was previously the minister at the last ruler Nāgadāsaka of Haryanka dynasty. He temporarily moved the capital to Vaishali. His greatest achievement was the destruction of the power of Avanti with its capital at Ujjain. This put to an end the 100-years old rivalry between Magadha and Avanti. From now onwards Avanti became the part of the Magadha until the end of Mauryan rule. 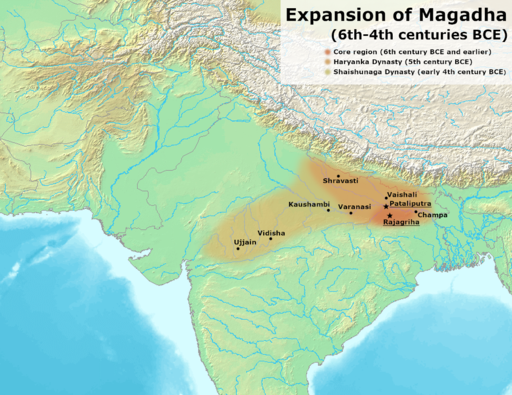 Shishunaga was succeeded by his son Kalashoka, whose region is considered important for two reasons.

According to the Harshacharita (The biography of Indian emperor Harsha by Banabhatta) he was killed by a dagger thrust into his throat near the capital. Buddhist text states that He had 10 sons, who ruled simultaneously. Purana states only one name from them Nandivardhana was probably the last ruler of his dynasty. Magadha empire then succeed by his illegitimate son Mahapadma Nanda, who founded the Nanda dynasty.