Maurya dynasty overthrown by the Shunga dynasty during 185 BCE. Pushyamitra Shunga was the founder of the dynasty. He was commander-in-chief(senapati) of the last Maurya King Brihadratha. While king was reviewing the Guard of Honor of his forces, Pushyamitra assassinated him and ascended throne.

Because of the weaker rulers after Ashoka, Magadha empire started to shrink. By the time when Pushyamitra sized throne, Magadha left only fraction of its original size. It reduced only to three states Pataliputra, Ayodhya, Vidisha and some parts of Punjab. Shunga dynasty known to have fought war with Kalingas, Satvahans, the Indo-greeks and possibly Panchals and Mathura.

Shunaga Dynasty was a Brahmin dynasty. According to the Buddhist text, Pushyamitra Shunga treated Buddhist very cruelly. He is said to have burned down Buddhist monasteries, destroyed stupas, but some consider these stories as probable exaggerations. In contradictory there are also evidences that Barhut Stupa was built during the Shunga Empire only.

History of Shunga Pushyamitra Shunga, who ruled approximately 36 years, is largely uncertain. Nothing considerable known about his successors. According to the Puranas Pushyamitra followed by the nine other rulers. Immediate successor of Pushyamitra was Agnimitra.

Agnimitra ruled for only 8 years. He was the hero of the famous play Malavikagnimitra written by Kalidasa. According to Malavikagnimitra, Agnimitra was the viceroy at Vidisha during his father’s region.  Before the rising of Shungas, Vidarbha had become independent from Mauryan Empire. The war break out between Shungas and Vidarbha during his region. Agnimitra’s son Vasujyestha, succeeded him. Not much details known for later Shunga successors. 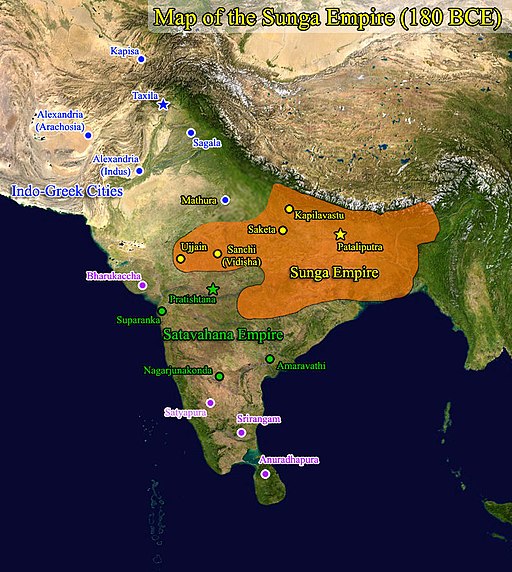 There is nothing extraordinary about political events happened during Shunga time. Their significance in the history consist in the social and cultural history of India. Art, education, philosophy andother forms of learning flowered during this period. Patanjali’s Yogasutra and Mahabhashya were composed during this time. Shunga used to write a variant of Brahmi and Sanskrit.

Shunga ruled roughly 112 years. Last of the Shunga king Devabhuti, killed by his minister Vasudeva Kanva who founded the Kanva dynasty in 75 BCE.